Back to all posts

A Review of Iron Heart by Manic Pixi

I finally took an hour to take off my blinders to recognize that the amazing drummer, Marshall Biever, is actually an even better guitarist for another band called Manic Pixi. Until now, I have ignored this fact for my own selfish reasons and due to being honest-to-God busy..

A week ago Manic Pixi released their second album, Iron Heart, and only when the link was *right* in front of my face did I bother to click. Oh, the regret. I could have been a fan for YEARS. The album is ridiculously cohesive despite, or due to, it’s eclectic style. It hit so many nostalgic trigger points that my only wish is that I had lived with these songs long enough for them to have their own layer of memory. I guess that will have to come in the future. 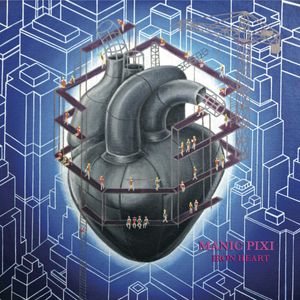 The first couple tracks of Iron Heart gave me an Alkaline Trio vibe (Chicago punk rock with super catchy melodies -- one of my all-time favorites). Manic Pixi brought the crunch, the simplicity, and the instant evocation of the careless drama of my youth combined with desire to jump around...all from the first bass lick. I was held in my early twenties for seven solid minutes, occasionally hearing Marshall’s tonal shifts that warped like memory.

It made sense, then, as Kat Hamilton created a kind of alternate time line with her voice. She travelled back to the experiences they had summoned and rewrote them with my own voice, through hers. And before I realized the chorus was singing “letters to my Childhood Self” I could already feel her breaking the rules of time travel and delivering messages to my youth.

I was startled out of that decade by the beautiful guitar of Finding Water on Mars which, morphing into Laughing, sent me into my teens with an Incubus throwback. It was easy to bury myself in the song. And when it got to the bridge, it pushed even farther back to the time when I had listened to Pink Floyd’s Dark Side of the Moon nonstop.

While My Parents Are Sleeping began and I immediately felt like I had been invited to witness something intimate. It felt significant, like one of those moments where you make a decision that sets you on a certain path. Like you wouldn't be who you are if it wasn't for that moment. Those moments so often go unnoticed if it weren’t for music. And this one carried a lot of weight.

I was immediately chided with “You can’t be seventeen forever” in Your Poetry is Failure.

I almost laughed. Kat knew. She had given me a gift, taking me through the story of my past. But now it was time to snap out of it. I suddenly realized, without looking at song titles, that the album had grown up. Once I did I felt almost foolish, for there it was: Adult Self. As the songs went on, digging farther into my past, the music itself became more mature. The story Kat had told--my story--went from fresh-eyed enthusiasm and angst through all the steps needed to come out the other side. The present. Where all of those feelings still exist but now tinged with regret or scars, success and failure. I wondered, how is my present so similar to hers? How, when I have been alive for nearly a decade longer than her?

I have to remind myself that this is the special power of music. Mindreading. Time Travel. Evocation. I should not be surprised. This is my job, after all. But it is so easy to take music for granted as an academic exercise and forget that it is magic. As a child, I would tell people my daddy was a magician. I didn’t know the word was musician. Maybe I was right the first time.